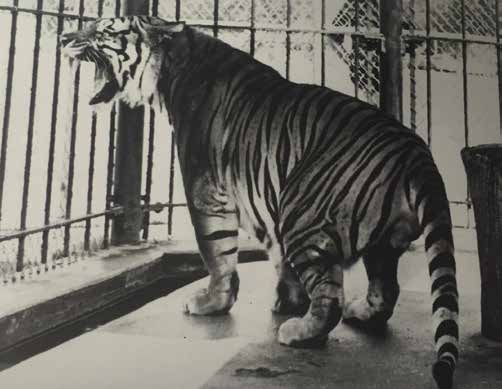 In 1958, Jim Corbett and Jack Gilmore located and purchased Mike III from the Seattle zoo. Mike III was born on November 26, 1957, and arrived at LSU in late August 1958.

The LSU student body raised $1,500 for his purchase and transportation (though the final purchase price was only $950, with an additional $100 for transportation). A five-cent “tradition fee” was assessed each student for the tiger’s care.

Mike III was introduced to the general public at the first home game of the 1958 season, on October 4 against Hardin-Simmons University (LSU won 20-6).

In 1976 (three years after the LSU School of Veterinary Medicine accepted its first class), Dr. Sheldon Bivin of the LSU SVM was asked to take over as veterinarian for Mike III. Dr. Bivin was head of both the Division of Laboratory Animal Medicine and the exotic animal medicine service in the LSU School of Veterinary Medicine (LSU SVM), so he was the natural choice. This marked the formal transfer of responsibility for the tiger from the Athletic Department to the LSU SVM.

Mike died of pneumonia on August 12, 1976, after the only losing football season of his lifetime.