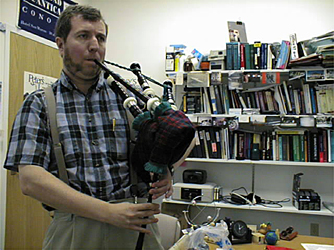 collaborate with Rodolfo Gambini, of the University of the Republic in Montevideo, Uruguay, our collaboration has been going on since 1990. We coauthored a book "Loops, knots, gauge theories and quantum gravity" in 1996 and have published many papers together. We study the quantization of general relativity using canonical methods. There is a small community pursuing this kind of research, which is complementary to the mainstream approach to quantum gravity: string theory. String theorists believe that one cannot quantize general relativity because it is not a fundamental theory and one has to replace it with string theory in order to quantize it. General relativity will be an "effective" "low energy" theory.

Those of us who work in canonical quantization believe that it has not been properly shown that one cannot quantize plain old general relativity in four space-time dimensions. It is clear that there are difficulties, but these are expected since we have never quantized a theory of space-time itself. Worse, we have little experience theories that are invariant under diffeomorphisms (this is the technical description for the fact that general relativity is coordinate-invariant), and mostly with theories that are considerably simpler than general relativity.

A great place to read more about the canonical vs string debate is Lee Smolin's book "Three roads to quantum gravity". Read my review for Physics Today of the book.

With Gambini we made several discoveries, including the fact that the celebrated Jones polynomial of knot theory appeared to solve the quantum Einstein equations. More recently we have been preoccupied with the use of lattice techniques to regularize the quantum Einstein equations. We have invented a generalization of Hamiltonian mechanics that applies to discrete systems like lattice theories and applied it to gravity. Remarkably, it appears to provide a consistent quantization of general relativity. This does away with conceptual problems that have plagued the subject, but leaves us with a challenging computational problem on the lattice. We expect to make progress in specific situations (for instance quantum cosmology) soon.

The collision of two black holes is a central problem in gravitational physics these days since it is expected that the LIGO interferometric gravitational wave detector will be able to measure gravitational waves produced by such collisions with a frequency of a few a year. This motivated the Grand Challenge Alliance of all the numerical relativity groups in the US to try to tackle the problem using supercomputers. In an article with Richard Price we showed that important progress could be made towards the computation of radiated energies and waveforms using the "close approximation". This approximation is based upon the fact that when the two black holes are close to each other they become surrounded by a common horizon and for all practical purposes they look like a distorted black hole. That can be treated using the well established perturbation theory of black holes. The results are astounding.

This approach has developed quite a bit over the last decade, you can read more in my Canada conference review talk. Some of these ideas have now been further extended and developed into a whole new paradigm for binary black holes callled the Lazarus Project centered at University of Texas at Brownsville.

Since moving to LSU, we have build a group that attempts to solve the Einstein equations for the binary black hole problem using supercomputers. We are happy that LSU hosts the fastest supercomputer in the world controlled by a university. You can get the latest developments of our group at the Hearne Institute homepage.