BATON ROUGE – LSU Department of Physics & Astronomy Professor E. Ward Plummer has been honored with the Award for International Scientific Cooperation from the Chinese Academy of Sciences, or CAS. He is one of three international experts to receive this award in 2016. He is the only physicist from the US to have ever received this award.

Plummer received the award for his contributions to build a talent pool of professionals with international vision. For more than 16 years, Plummer has actively promoted substantive collaboration in science and technology as well as talent cultivation between CAS and LSU. With his support, the Institute of Physics worked with LSU to develop a dual degree program in physics, where students spend at least two years at each institution, taking their core courses at the home institution and doing their research and advanced courses at the host institution. 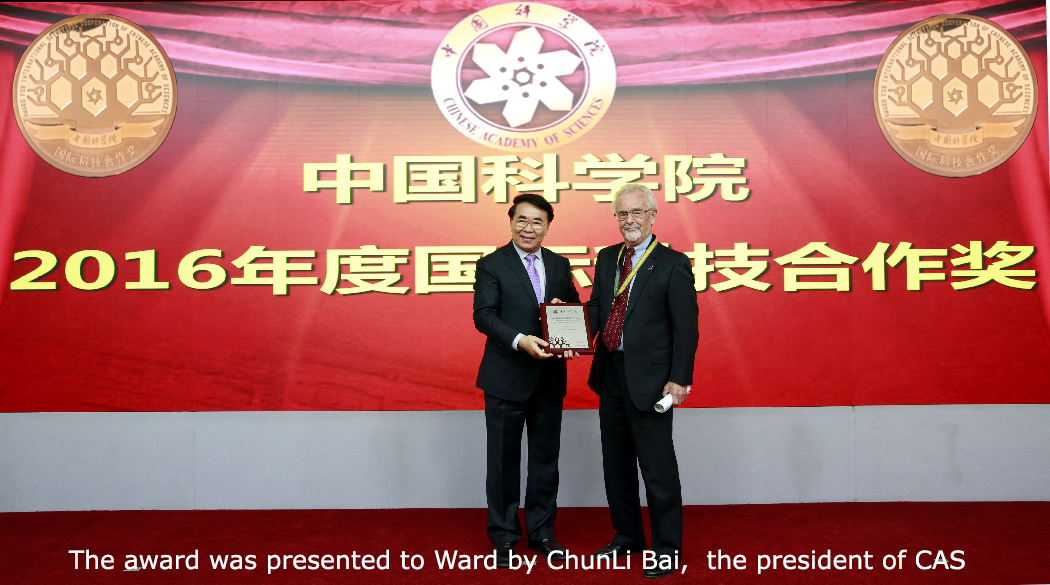 “Receiving this award is a great honor, representing the culmination of nearly two decades of collaborations with my Chinese colleagues” said Plummer.  “This award should open the door for developing and significantly enhancing LSU/China collaborations in education and research.”

Plummer has served as the chief scientific adviser for the International Center for Quantum Structures at the CAS Institute of Physics since 2000. He also acted as foreign adviser at the High Magnetic Field Laboratory under the Hefei Institutes of Physical Science, as leader of the international expert panel for evaluating the Institute of Physics’ 13th Five-Year Plan (2016-2020), and as a member of the judging panel for many important awards.

“We are very excited that Ward has been recognized with such a distinguished honor. His vision for expanding the university’s network of international faculty researchers has set the stage for a number of successful collaborations that have paved the way for advanced innovations in teaching and research at LSU,” said Cynthia Peterson, dean of the LSU College of Science.

Joining LSU’s faculty in 2009, as part of the Multidisciplinary Hiring Initiative in Materials Science and Engineering, Plummer is a professor in the Department of Physics & Astronomy, and a special assistant to the Vice Chancellor of Research. He received a Bachelor of Arts degree from Lewis and Clark College in 1962 and completed his Ph.D. degree in physics at Cornell University in 1967. He is the only member of the National Academy of Science at LSU, and was elected a fellow of the American Academy of Arts and Sciences. As an eminent physicist in materials research, he has developed advanced high-resolution observation methods focused on investigating the phenomena associated with the unique environment at a surface or interface. To date, he has published more than 400 scientific articles and been quoted by other scholars over 17,000 times.

More news and information can be found on LSU Physics & Astronomy website,