BATON ROUGE - Why the universe is dominated by matter today, instead of being comprised of equal parts matter and antimatter, is one of the most intriguing questions in all of science. One of the conditions required for the observed dominance of matter over antimatter to develop is the violation of Charge-Parity (CP) symmetry, which is the principle that the laws of physics should be the same if viewed upside-down in a mirror, with all matter exchanged with antimatter. If CP violation occurs in neutrinos, it will manifest itself as a difference in the oscillation probabilities of neutrinos and antineutrinos.

LSU physicists Thomas Kutter and Martin Tzanov were among the international T2K Collaboration who recently announced their findings on the symmetry between neutrino and antineutrino oscillation. With newly collected antineutrino data, T2K has performed a new analysis, fitting both neutrino 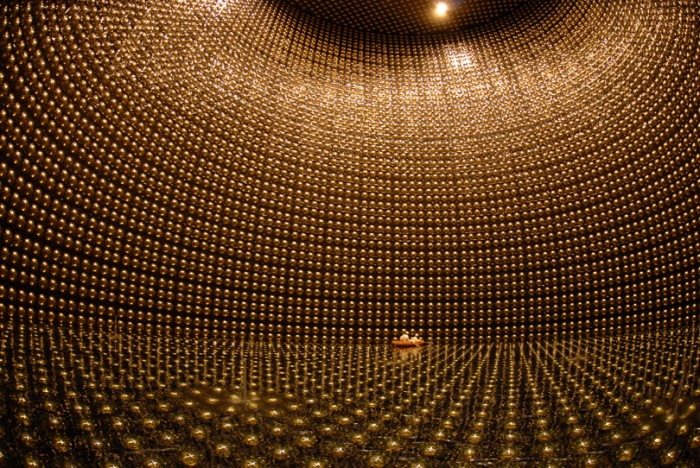 and antineutrino modes simultaneously. T2K’s new data continue the trends observed in 2015, which is a preference for maximal disappearance of muon neutrinos, as well as a discrepancy between the electron neutrino and electron antineutrino appearance rates.

In the T2K experiment in Japan, a muon neutrino beam is produced at the Japan Proton Accelerator Research Complex (J-PARC) located in Tokai village, Ibaraki prefecture, on the east coast of Japan. The neutrino beam is created by directing protons from the J-PARC accelerator onto a target to produce an intense secondary particle beam that is focused and filtered by strong magnetic fields. The focused particle beam decays into a beam of muon neutrinos or antineutrinos, depending on the field direction. The neutrino/antineutrino beam is monitored by a detector complex, 280 m away from the neutrino target and aimed at the gigantic Super-Kamiokande underground detector in Kamioka, near the west coast of Japan, 185 miles away from Tokai.

Kutter and his LSU research team of post-docs and students have designed and constructed part of the T2K near detector, which maps out the neutrino beam on its way to the Super-Kamiokande far detector. Physicists at LSU continue to operate the experiment, to collect data and make significant contributions to the analysis.

Currently, graduate student Chris Greenley and post-doc Tarak Thakore are performing data quality control checks to identify a high quality data set which forms the basis for data analysis. Additionally, LSU’s Tzanov has been involved in the construction of the neutrino beamline magnetic horn system, and he simulated this system to extract information about the neutrino beam.

Kutter says “If the Big Bang produced equal amounts of matter and anti-matter they would have annihilated and left nothing but radiation. However, we know that the Universe is filled with matter and we have now observed a hint of neutrinos and anti-neutrinos behaving differently. This result fuels a possible explanation why the Universe is filled with matter rather than antimatter or just radiation. – We are proud that our research team at LSU has contributed at many levels to the T2K experiment and we are looking forward to continue our involvement to confirm the signal.”

The LSU high-energy physics group is now focusing on data analysis from the near and far detectors of T2K, including the interpretation of data in the context of neutrino oscillation models. Thakore has become an expert on the technical aspects of developing and running algorithms to interpret the data.

The T2K experiment was constructed and is operated by an international collaboration consisting of over 450 scientists from 61 institutions in 11 countries. The T2K groups in the USA are primarily supported by the Department of Energy.