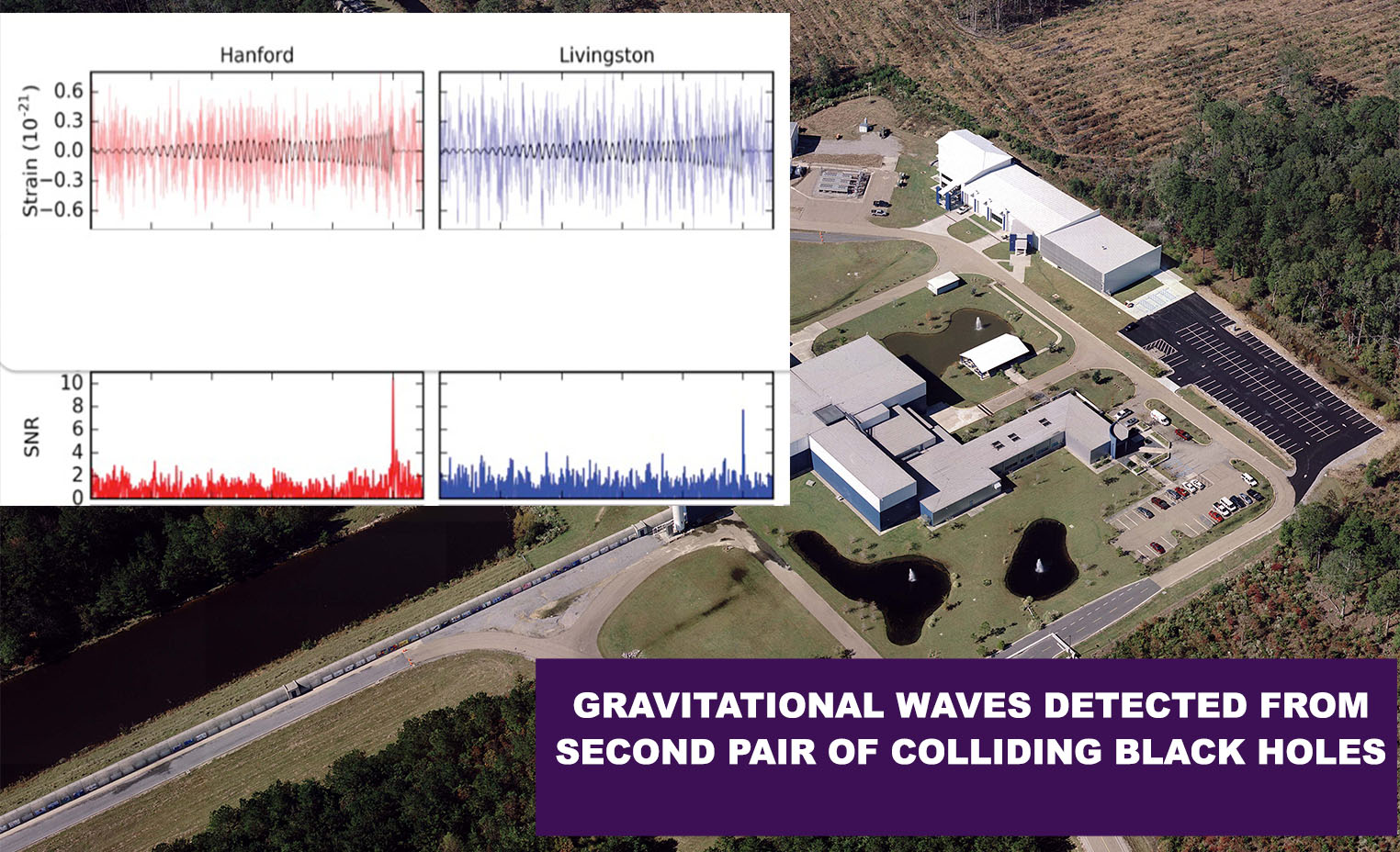 On December 26, 2015 at 03:38:53 UTC, scientists observed gravitational waves-ripples in the fabric of spacetime-for the second time.

The gravitational waves were detected by both of the twin Laser Interferometer Gravitational-Wave Observatory (LIGO) detectors, located in Livingston, Louisiana, and Hanford, Washington, USA.

The LIGO Observatories are funded by the National Science Foundation (NSF), and were conceived, built, and are operated by Caltech and MIT. The discovery, accepted for publication in the journal Physical Review Letters, was made by the LIGO Scientific Collaboration (which includes the GEO Collaboration and the Australian Consortium for Interferometric Gravitational Astronomy) and the Virgo Collaboration using data from the two LIGO detectors.

Gravitational waves carry information about their origins and about the nature of gravity that cannot otherwise be obtained, and physicists have concluded that these gravitational waves were produced during the final moments of the merger of two black holes-14 and 8 times the mass of the sun-to produce a single, more massive spinning black hole that is 21 times the mass of the sun.

“It is very significant that these black holes were much less massive than those observed in the first detection,” says Gabriela Gonzalez, LIGO Scientific Collaboration (LSC) spokesperson and professor of physics and astronomy at Louisiana State University. “Because of their lighter masses compared to the first detection, they spent more time-about one second-in the sensitive band of the detectors. It is a promising start to mapping the populations of black holes in our universe.”

During the merger, which occurred approximately 1.4 billion years ago, a quantity of energy roughly equivalent to the mass of the sun was converted into gravitational waves. The detected signal comes from the last 27 orbits of the black holes before their merger. Based on the arrival time of the signals-with the Livingston detector measuring the waves 1.1 milliseconds before the Hanford detector-the position of the source in the sky can be roughly determined.

“In the near future Virgo, the European interferometer, will join the network of gravitational wave detectors and will improve our contribution to the multi messenger astronomy,” notes Fulvio Ricci, the Virgo Collaboration spokesperson. “The three interferometers together will permit a far better localization in the sky of the signals.”

The first detection of gravitational waves, announced on February 11, 2016, was a milestone in physics and astronomy; it confirmed a major prediction of Albert Einstein’s 1915 general theory of relativity, and marked the beginning of the new field of gravitational-wave astronomy.

The second discovery “has truly put the ‘O’ for Observatory in LIGO,” says Caltech’s Albert Lazzarini, deputy director of the LIGO Laboratory. “With detections of two strong events in the four months of our first observing run, we can begin to make predictions about how often we might be hearing gravitational waves in the future. LIGO is bringing us a new way to observe some of the darkest yet most energetic events in our universe.”

“We are starting to get a glimpse of the kind of new astrophysical information that can only come from gravitational wave detectors,” says MIT’s David Shoemaker, who led the Advanced LIGO detector construction program. 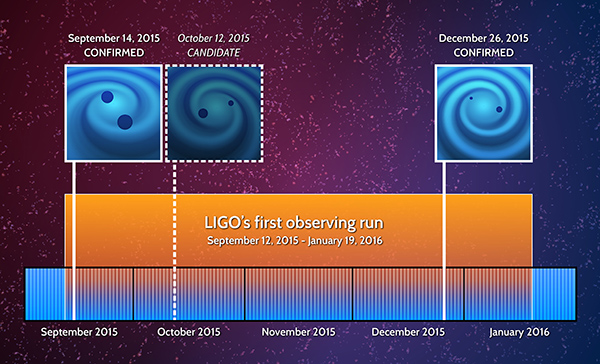 Both discoveries were made possible by the enhanced capabilities of Advanced LIGO, a major upgrade that increases the sensitivity of the instruments compared to the first generation LIGO detectors, enabling a large increase in the volume of the universe probed.

“With the advent of Advanced LIGO, we anticipated researchers would eventually succeed at detecting unexpected phenomena, but these two detections thus far have surpassed our expectations,” says NSF Director France A. Cordova. “NSF’s 40-year investment in this foundational research is already yielding new information about the nature of the dark universe.”

Advanced LIGO’s next data-taking run will begin this fall. By then, further improvements in detector sensitivity are expected to allow LIGO to reach as much as 1.5 to 2 times more of the volume of the universe. The Virgo detector is expected to join in the latter half of the upcoming observing run.

The LIGO Livingston observatory is located on LSU property, and LSU faculty, students and research staff are major contributors to the 15-nation international LIGO Science Collaboration, or LSC. LIGO research is carried out by the LSC, a group of more than 1,000 scientists from universities around the United States and in 14 other countries. More than 90 universities and research institutes in the LSC develop detector technology and analyze data; approximately 250 students are strong contributing members of the collaboration. The LSC detector network includes the LIGO interferometers and the GEO600 detector.

LSU’s investment in gravitational-wave detection spans more than four decades, and is among the longest of the institutions contributing to the present discovery. LSU faculty, students and scholars have had leading roles in the development of several generations of gravitational wave detectors, in their commissioning and operation as well as the collaborations formed. Today’s achievement is in part an outcome of LSU’s long-term vision and commitment to high-risk, high-potential gain scientific research.
Joseph Giaime, LSU professor of physics and astronomy, is the observatory head of LIGO Livingston.
“The December 26 event was a wonderful capstone to Advanced LIGO's first observational run. The months of round-the-clock work by the LIGO staff and collaborators during the run allowed us to see this new pair of black holes and begin to understand the variety nature offers,” Giaime said.

LSU’s pioneering role in this science began in 1970 with the arrival of William Hamilton, now professor emeritus, who along with Physics Professor Warren Johnson, built and operated previous-generation cryogenic bar gravitational wave detectors on campus for many years. LSU Assistant Professor Thomas Corbitt focuses his research on advanced quantum metrology techniques for a future detector. These examples of faculty involvement represent more than 45 years of cutting-edge research, with state and institutional commitment, and long-standing multimillion dollar support from NSF producing educational opportunities for students and postdoctoral researchers, several of whom have gone on to professorial appointments around the world.

“Looking ahead, we have to find ways to make detectors even more sensitive, so that we can observe other types of events that are not as loud as black holes colliding,” said Corbitt. “The discrete, or quantum, nature of the light used in the measurement limits the sensitivity, but we are developing methods to manipulate this noise source in order to improve future detectors.”

LSU’s campus is located 25 miles from LIGO Livingston in Baton Rouge. LSU has about 1,600 faculty; 31,000 students; and is classified by the Carnegie Foundation as “Doctoral/Research Universities-Extensive.” LSU is the only research university in the U.S. located close enough for students and faculty to engage in daily interactions with a LIGO observatory. LSU faculty and administrators, including Chancellor Emeritus James Wharton, led the effort to bring LIGO to Louisiana, and the university owns the land on which LIGO is operated.

Virgo research is carried out by the Virgo Collaboration, consisting of more than 250 physicists and engineers belonging to 19 different European research groups: 6 from Centre National de la Recherche Scientifique (CNRS) in France; 8 from the Istituto Nazionale di Fisica Nucleare (INFN) in Italy; 2 in The Netherlands with Nikhef; the Wigner RCP in Hungary; the POLGRAW group in Poland and the European Gravitational Observatory (EGO), the laboratory hosting the Virgo detector near Pisa in Italy.

More news and information can be found on LSU Physics & Astronomy website, http://www.phys.lsu.edu.