Coastal hydrodynamics research at CSI greatly benefits from the immediate access to the Northern Gulf of Mexico coast, the extensive monitoring instrumentation deployed there by the WAVCIS lab, and the remote sensing capabilities provided by Earth Scan Lab. Louisiana coast and shelf are exciting places to study the interaction between sedimentary and hydrodynamic processes in heterogeneous sediment environments. Sedimentary fabric is diverse, ranging from coarse sands to fine-grained muds and silt. Atmospheric conditions can vary greatly, from calm to moderate cold front storms to hurricanes. The geographic location is the contact line between two very dynamical systems - the fresh water system of the Mississippi River and the Gulf of Mexico. In addition, the observational capabilities deployed by CSI on the coast are among the most advanced in the world in their class.

Ongoing research topics include coupling of hydrodynamic and sedimentary processes in muddy environments, coupled effects of wave and surge during hurricane inundation, effects of waves and currents on the evolution and stability of the barrier islands. Recent studies at CSI exposed significant deficiencies in the ability of existing models to handle cohesive sedimentary environments. The reason is the essentially different physics involved, not accounted for by the models. With funding from ONR, LA Board of Regents, NOAA and other agencies, research is in high gear to enhance observation capabilities and reformulate basic governing equations for stochastic wave propagation over muddy seabeds. 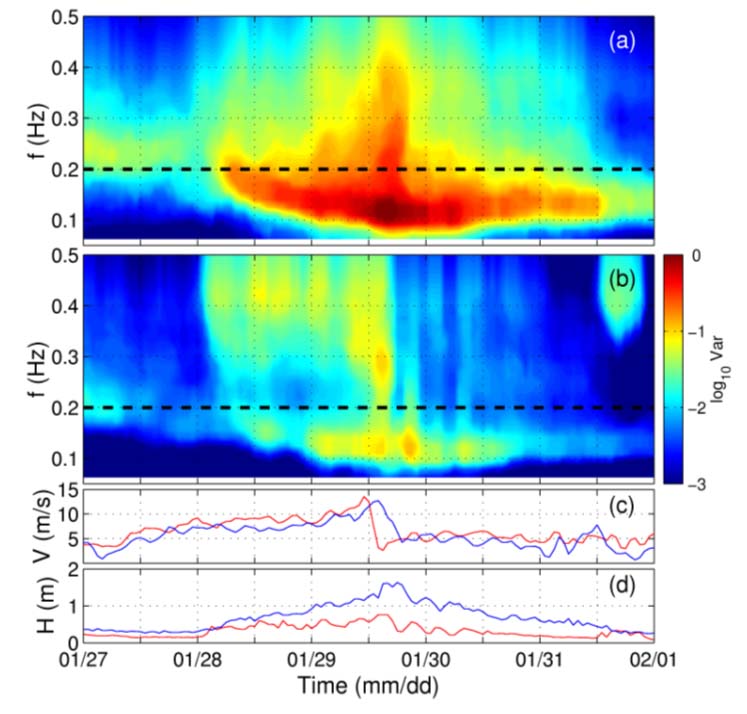 Wave and wind evolution versus time, during a storm associated with a cold front which passed over WAVCIS on 28-31 January, 2001 (Sheremet and Stone, 2003). a,b) Evolution of wave spectrum. Short- and long-wave frequency bands are separated by dashed line, corresponding to the 0.2 Hz frequency. c) Wind speed, measured and simulated . d) Significant wave height (CSI 5 and CSI 3 data represented by blue and red lines, respectively). 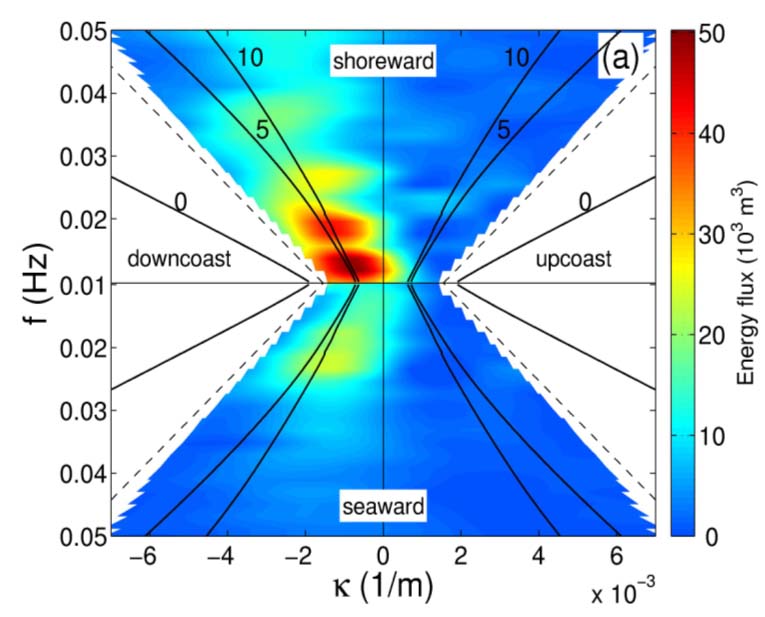 Frequency-alongshore wavenumber spectrum of energy flux of low frequency waves (Sheremet and Guza, 2003, in review). Upper half of plot corresponds to waves propagating shoreward, lower half to waves propagating seaward. A new analysis method separates for the first time shoreward from seaward energy fluxes, while resolving also the directionality of the waves (the alongshore wavenumber is a function of the angle of propagation). Data for this analysis comes from the SandyDuck '97 experiment (Sheremet et al. 2002).