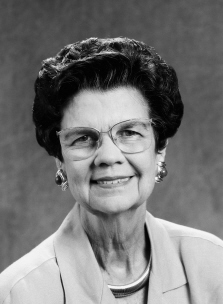 High there, how he rung upon the rein of the wimpling wing In his ecstasy! . . . then off, off forth on swing As a skates heel sweeps smooth on a bow-bend . . .

— from Gerard Manley Hopkins, The Windhover

Formerly two classrooms and a hallway, the HopKins Black Box was obtained and converted in 1992 through the efforts of Dr. Mary Frances HopKins. Ten years later, in 2002, the space was officially renamed in honor and celebration of her outstanding achievements in all areas of the profession.

Mary Frances HopKins received her Ph.D. from the Department of Speech at LSU in the summer of 1968. That fall, she joined the faculty as an assistant professor and began a distinguished career in oral interpretation and performance studies. For more than twenty years, her textbook, Performing Literature (co-authored with Beverly Whitaker Long), was a popular introductory text for students of oral interpretation. She also gained a national reputation as a pioneering scholar in narrative theory, southern fiction, and the place of literature in performance studies. Her articles have appeared in the Quarterly Journal of Speech, Text and Performance Quarterly, Communication Education, Literature in Performance, Communication Monographs, Central States Speech Journal, and the Southern States Speech Journal. Dr. HopKinss scholarship also played a major role in defining the field. Her invited essays appear in both historical and contemporary surveys of interpretation and performance studies.

Over the years, Dr. HopKins has served the department, the university, the field of performance studies, and the broader discipline of communication studies with unparalleled distinction. She was appointed assistant dean of the LSU Graduate School from 1979-1982 and served as chair of the department from 1982-1991. She also held numerous offices outside of LSU, including chair of the National Communication Association (NCA) Finance Board, chair of the NCA Performance Studies Division, and president of the Southern States Communication Association. From 1983-1986, Dr. HopKins was named editor of the national journal, Literature in Performance. She also served on the editorial boards of Literature in Performance, Text and Performance Quarterly, Communication Education, Speech Teacher, and the Southern Speech Communication Journal. In recognition of her exceptional career as a scholar, teacher, and administrator, Dr. HopKins received the honors of Alumni Professor and Professor Emerita in 1991 and 1996, respectively.

Throughout her career, Dr. HopKins has viewed oral interpretation/performance studies as both a critical discipline and a performing art. Her insight is evident in the artistry with which she crafts her many public performances and presentations. Over the years, she has adapted, directed, or performed in more than thirty pieces. Of particular note is the ever memorable duet performance of Flannery OConnors Everything Rises Must Converge, which she performed with her colleague, the late Bill Harbin. As recent as 2002, Dr. HopKins performed the role of Katherine Anne Porter in Laura Furman and Lynn Millers one-person play Passenger on the Ship of Fools, which premiered at the University of Texas. Later that same year, Dr. HopKins reprised the performance at LSU in the HopKins Black Box. Dr. HopKins also has graced the stage as an invited lecturer or critic at numerous performance and communication studies conferences and festivals. In 2005, she delivered the prestigious Giles Wilkerson Gray Lecture, which was held in association with the Southern States Communication Association convention in Baton Rouge. In her address, Tell It Slant, she combined her piercing intellect with her gracious good humor to offer a challenge to educators, in all disciplines, regarding the value of literature in creating ethical knowledge.

It is in the light of this spirit that we work and play in the space she created.