When mechanical engineering alumnus Chandler Scheuermann began his job hunt, he had two criteria: find a career in the aerospace industry and live close enough to Baton Rouge to spend a few Saturday nights in Death Valley.

“I wanted to go into the space program, and every possible career avenue I was facing would have sent me to the far corners of the nation and potentially the globe,” Scheuermann said. “I am Louisiana born and raised, so when I received an offer in New Orleans working in the burgeoning aerospace industry, I was beyond enthused.”

Scheuermann, who graduated in May, is now part of Boeing’s Manufacturing Engineering group at NASA’s Michoud Assembly Facility in New Orleans, the birthplace of the SLS rocket.

“I am working to integrate the RS-25 engines and their associated hardware into the body of the SLS rocket,” he explained. “The challenge is to take the countless components which comprise the rocket’s engine section and devise a feasible assembly procedure such that the manufacturing process can be conducted as safely and swiftly as possible.”

Scheuermann makes the duties of his job sound simple, but there are obstacles and difficulties that come with being new to the job.

“The most challenging aspect of what I do on a daily basis is remaining cognizant of the fact that I am brand new in the rocket world,” he said. “We all make mistakes along the way. I need to do my best to take each one as a learning opportunity to improve both as an engineer and as a teammate for my coworkers.”

Scheuermann said his operation functions as a team “100 percent of the time,” and every individual working on the SLS program has a critical role to play in ensuring the rocket is delivered on time and ready to fly.

“In our effort to bring manned space launch capabilities back to the United States, it takes thousands of folks working hard everyday to produce what will be mankind’s largest rocket ever built,” Scheuermann said proudly. “I consider it an honor to be able to contribute to that goal, and each of us working here is looking forward to the day America takes the skies on our own accord again.”

Scheuermann is happy to note that, with a job in the “real world,” he has been able to relieve some financial woes and enjoy his career path.

“The most exciting aspect of graduation has been a life-changing upgrade from white bread to whole-grain loaves,” Scheuermann said, laughing. “That, coupled with working on rocket engines, has been more than enough excitement over the last few months.”

Scheuermann credits his career success to LSU, particularly to the Olinde Career Center for introducing him to potential employers, and to the corporate partners and donors who helped financially support his education.

“These awards serve as tangible evidence of the fact that care for students is not restricted to the generosity of an individual but can also be attributed to a conglomerate of LSU College of Engineering alumni whose successful contributions in the workforce enable their companies to give back to students in fantastic ways,” Scheuermann said.

Last month, at the Society for Engineering Excellence’s annual banquet, Scheuermann relayed his thanks directly to those benefactors as part of the closing remarks. 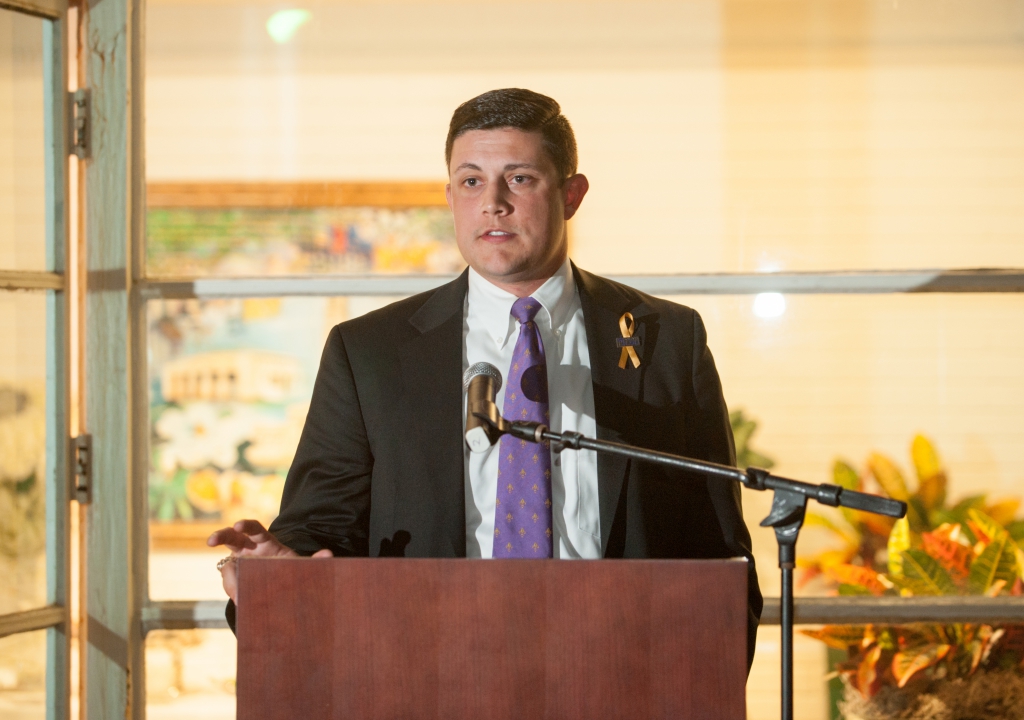 The goal of his speech, he said, was to ensure Society members that whether they acknowledged it or not, the commitment of service that the members of the society pledge is felt by the College of Engineering students on a daily basis.

“Their selfless charity and exemplary performance in the professional community has provided us, recent and upcoming graduates, with nothing short of the perfect example of what it means to honorably represent the LSU Engineering family, always,” Scheuermann stated.