Update (6/22/2015): The team placed 9th out of 65 teams at the FSAE competition in Lincoln, Nebraska. Congratulations, Tigers.

Last month, the LSU Tiger Racing Team clocked their best time ever at the Formula SAE Series Collegiate Design Competition in Michigan. This week, they’re in Nebraska trying to do it again. 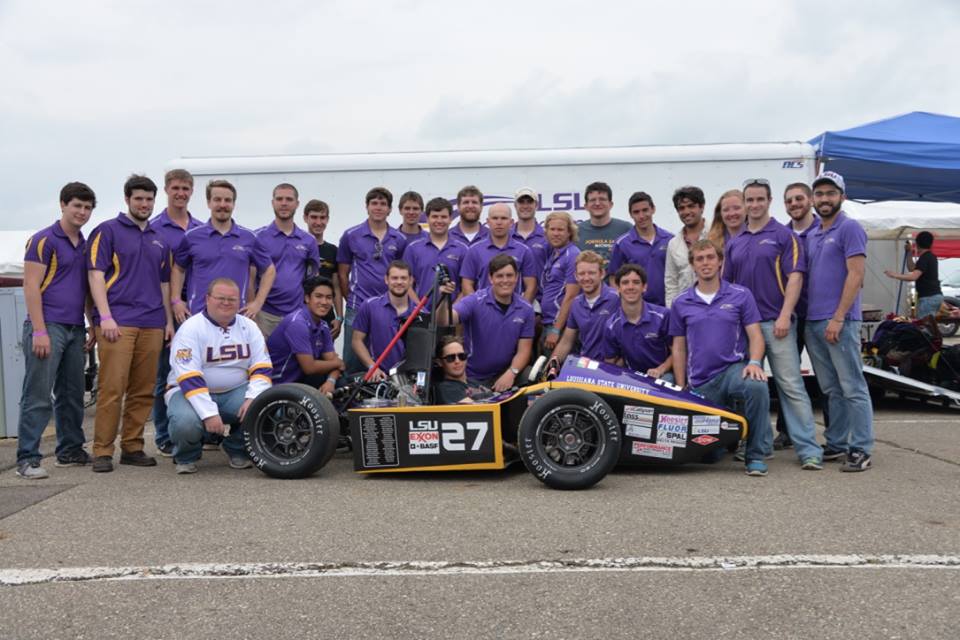 The Tigers are competing at Formula SAE Lincoln event today through Saturday.

“We’re feeling pretty good,” said Alex Rome, a civil engineering senior who served as the team president for the past year. “Our car performed exactly how we wanted it to in Michigan. We’re hoping to place in the Top 15 in Nebraska.”

The team is confident they can achieve that goal, Rome said. After all, they’ve made considerable climbs in the rankings in the last three years.

“We placed 76th the first year, 40th last year and 22nd this year,” he said of the competition in Michigan, which hosted 110 international teams this year. “We’re making huge steps.”

Much of that success can be attributed to the “transfer of knowledge,” Rome said. Before the Tiger Racing Team became a university-recognized student organization, it was a senior design project in the Department of Mechanical and Industrial Engineering. In light of consecutive years of poor performance and the magnitude of the undertaking, the department decided not to accept Formula SAE as a capstone project and encouraged students to develop it as a student organization instead. The students responded with enthusiasm and made it a reality with departmental support.

“I believe the single most important thing that happened is that motivated students get involved in hands-on engineering early and start to carry the effort once their older teammates graduate,” he said, “which is very different from students working on a senior design project, where most of the gained knowledge is lost after they graduate.”

That’s not to say hard work and dedication haven’t played a role, Schoegl added. “They spend countless hours on the project without getting much in terms of course credit,” he said.

And the work never stops. After the two main U.S. collegiate competitions, held in Michigan and Nebraska every spring, wrap up, the team analyzes its design and performance results from that year and makes improvements for the next.

By the start of the fall semester, the team is ready to manufacture a new vehicle. They secure funding from sponsors, order the parts, and all 20 to 25 members are divided into work teams, based on their availability, to begin construction.

After it’s complete, the team takes the car on a series of test runs, shows it off at local car shows and competes in local races, making tweaks along the way.

All of that leads to those two main collegiate competitions, where teams participate in a series of trials and are judged the on design, cost, presentation, acceleration, autocross, fuel economy and endurance of their racecar.

“It’s a lot, but it’s worth it,” Rome said, noting all students, regardless of major, should get involved. “This has given me so many opportunities, in terms of jobs and contacts. As the president, I had to get funding, meet recruiters, help get the guys on my team hired by the companies they wanted to work for …”

Not only is it a great opportunity for students, Schoegl added, “It’s also a great benefit to the College of Engineering itself, as well-performing teams really contribute to a growing reputation of the LSU Engineer.”