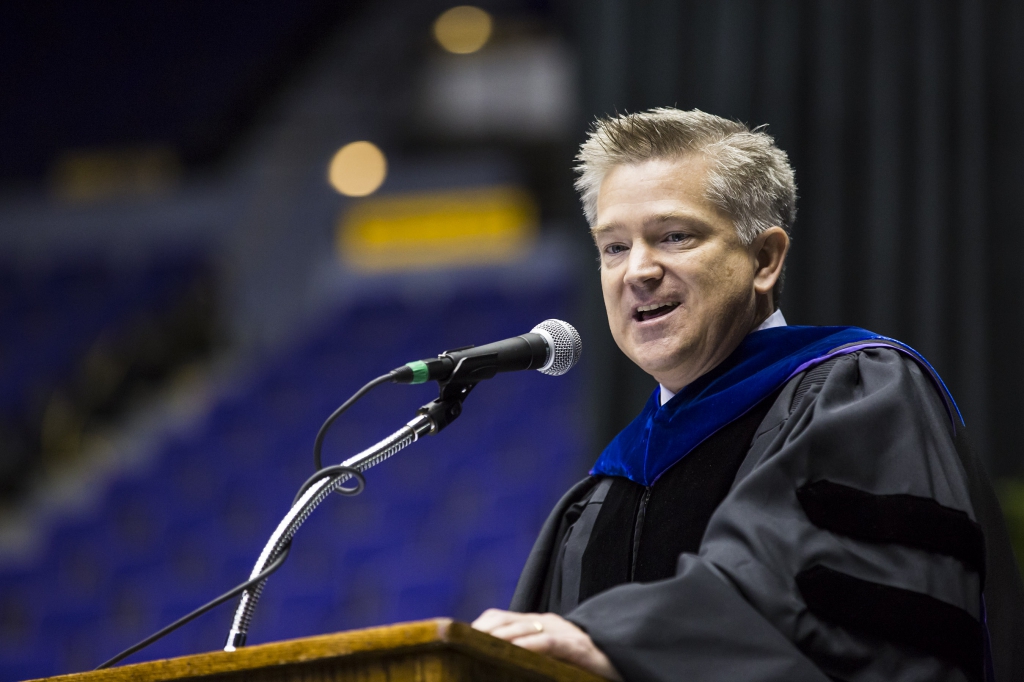 “I’ve had the good fortune to experience this rich tradition as a student on four different occasions,” Comeaux said. “It’s a true honor to share this experience with you today.”

Comeaux gave himself two goals for his commencement address: do a favor to the students and be memorable, and share some lessons learned from going to Mars that the class of 2014 might find useful in their careers.

For the first goal, he asked the class to Google “Five Best NASA Scientists Ever.” The result shows an article that features a GIF of “Jubilant Celebration Guy,” who is Comeaux himself celebrating Curiosity’s landing.

“Every time you see that blue-shirted blur on a documentary, a commercial, a news reel or a spoof on NASA, you should now be able to recall that that guy was your commencement speaker,” Comeaux joked. “While my colleagues and others may not understand, let it be known that jubilant celebration is not an unusual sight on a Saturday night in Tiger Stadium.”

Comeaux shared background stories on the different aspects of the Curiosity mission to Mars and provided lessons learned from the experience. His lessons included:

Regarding shooting for the stars Comeaux said, “At worse, you might struggle a bit during your journey, but it’s more likely that you’ll find your calling that makes you happy, and if you get lucky, instead of stars, you may land on Mars.”

The August 2014 graduating class represented 41 Louisiana parishes, 34 U.S. states and 28 foreign countries. Men made up 50.08 percent of the graduates, and women made up 49.92 percent.

Alexander congratulated the class on the significant accomplishment of earning their degrees. He also reminded them of the responsibility and obligation they now have to all those in need of similar educational opportunities that could enable them to maximize their potential both as individuals and as global citizens

“As one of the world’s most educated citizens with the greatest potential to help others, you are now being handed a mantle enabling you to provide widespread hope and global opportunity,” Alexander said. “In short, you are needed to make the world a better place. You have the tools, the skills and the talent to do so.”

During the commencement ceremony, Lt. Col. Lawrence P. House III, professor of military science, recognized the newly commissioned ROTC cadets – 2nd Lt. Garrett Lee Templet, of Kountze, Texas, who received a Bachelor of Science degree in construction management from the College of Engineering, and 2nd Lt. Kevin Walter Seidel, of Clearwater, Fla., who received a Bachelor of Arts degree in independent studies from the College of Humanities & Social Sciences with minors in history, philosophy and professional leadership. A separate commissioning ceremony was held on Thursday, Aug. 7.

A complete list of graduates and honor graduates is available online at LSU’s commencement website. This site can be accessed directly atwww.lsu.edu/commencement