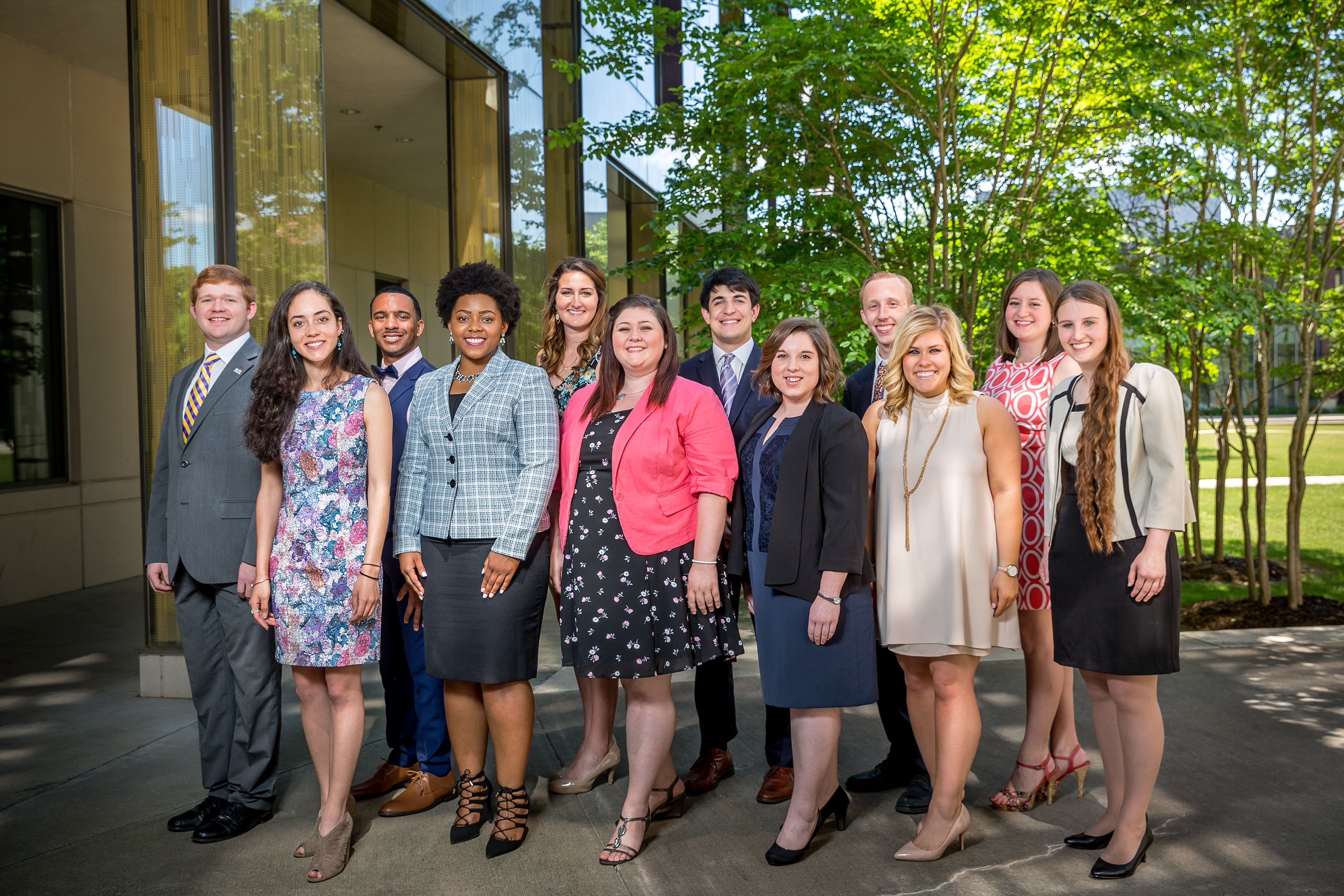 BATON ROUGE – The LSU Office of the Dean of Students proudly presented the Tiger Twelve Class of 2016 at a ceremony held Saturday, April 23, in the rotunda of the LSU Business Education Complex.

The Tiger Twelve Class of 2016 includes:

Brown was an executive board member of Qroma, an LGBTQ advocacy group that plans the annual Louisiana Queer Conference, held annually at LSU. Brown was recognized in National Residence Hall Honorary, has volunteered with Geaux BIG Baton Rouge, and held several positions in Dance Marathon at LSU. He was a resident assistant for three years and served as a Residential Life Conference Assistant during the summers. Brown is planning a career in higher education student affairs.

Cordova worked with middle school students through the McKinley Middle Magnet Mentoring and Step Team Program and served as a co-coach for the team. She was co-president of the Impact Movement, a spiritual group, through which she helped peers find God and become active change agents on campus. She served as a member of the College of Art and Design’s Dean’s Student Advisory Council, Architecture’s 4th and 5th Year Class Representative and volunteered through the National Organization for Minority Architecture Students’ (NOMAS) Mentor/Mentee program and served on its executive board. Cordova is recognized as the School of Architecture’s first Ronald E. McNair Research Scholar with her research regarding architecture and homelessness in New Orleans, and served in Ecuador as part of the LSU CHANGE Break team. Recently, she was awarded a U.C. Berkeley Undergraduate Prize for Architectural Design Excellence Travel Fellowship, where she will be traveling to Haiti this summer to further her research. Cordova plans to work as an architect to use cultural competence to address challenges of designing for impoverished communities.

Hogan was a member and student leader in Engineering Diversity Ambassadors and the Biological Engineering Student Organization throughout her years at LSU. She was elected to the prestigious membership of the Tau Beta Pi national engineering honor society and rose to the position of vice president this past school year. She is a member of Student Government, where she was elected to represent the College of Engineering, and a member of the LA-STEM Research Scholars Program. For the past four years, she has researched new medical developments through biomedical engineering in the lab of Associate Professor Daniel Hayes. She also represented LSU in the GIANT International Internship Programme in Grenoble, France. Hogan will pursue a combined M.D./Ph.D. to continue her work in medical research.

Latham was elected to several Student Government positions and represented University College Center for the Freshman Year, University College Center for Advising and Counseling, and the Manship School of Mass Communication. She served as an LSU Ambassador, as a Summer Orientation Team Leader, and a STRIPES Small Group Leader. She has volunteered with Geaux BIG Baton Rouge.  Latham has worked as an intern in the National Hurricane Museum and Science Center and a student assistant in the LSU Tiger Card office. She represented the university twice on the LSU Homecoming Court.

Lungaro has served in leadership positions each year since Dance Marathon was established at LSU. She was an LSU Ambassador and a Spring Invitational Orientation College Leader. Lungaro was elected to Beta Beta Beta national biological honor society and rose to serve as president of the organization her senior year. She also represented her peers as President of the College of Science College Council. She was also an active member of Volunteer LSU and served as a Community Bound team leader for several years. Lungaro worked as a tutor in the Center for Academic Success, helping her peers with a number of advanced courses. Lungaro plans a career as a physician.

Marcel was an LSU Ambassador and served as an orientation and a STRIPES leader. She served local elementary school students as an ESL English tutor, helping them learn to read English after school. Marcel pledged into the Alpha Phi Sorority and served in multiple leadership positions, including chapter president her senior year.  She was a member of the Leadership LSU Class of 2016. She studied abroad in Australia, New Zealand, and Fiji and served as youth mission leader on a mission trip to Guatemala.

Mullet worked in the Center for Academic Success as a supplemental instructor to assist students in high enrollment courses that have historically been particularly difficult for students. He also tutored elementary school children in English as an ESL tutor, helping them to learn to read English texts. Mullet was a Student Government Senator and the Speaker Pro Tempore of the Senate. He is conducting undergraduate research in environmental biochemistry and volunteers in the medical field in preparation for a career as a physician. He is a founding member of the LSU chapter of Beta Theta Pi fraternity.

Pittman served as president of the Panhellenic Executive Council and as director of the 150-participant EMPOWER retreat on the Greek Board of Directors. She is a member of Phi Mu sorority and served as new member director. She is a member of the Leadership LSU Class of 2016 and was a member of Dance Marathon at LSU. Pittman plans a career as an educator.

Stephens served as the student director of Volunteer LSU and the international CHANGE Break alternative service break program chair and has served on this trip to Ecuador the last two years and in Peru the year prior; Stephens is scheduled to serve in Ecuador again this summer. She served in a few leadership capacities for Geaux BIG Baton Rouge, the largest single day of service at LSU. She was a reading friend with Volunteers in Public Schools. Stephens participates in the Louisiana Service and Leadership Program within the LSU Ogden Honors College, where she studies chronic problems of Louisiana. She was recently selected as a Truman Scholar.

Zerkus served on the Student Government  (SG) Senate and as the Assistant Director of External Affairs in the SG executive branch. He participated in the SG Listen and Make It Matter initiative and as bus captain of the annual Student Government Bus Trip to away football games. He worked in the Center for Academic Success as a supplemental instructor. He served on the Residential Life Student Conduct Board

Tiger Twelve is an honor that has been presented to 12 seniors by the Office of the Dean of Students since 2003. Students selected as members of the Tiger Twelve are current, full-time students, who have maintained at least a 2.5 GPA and best exemplified the seven tenets outlined in the LSU Commitment to Community, a statement of LSU’s basic principles as an academic community. It was crafted by a committee of students, faculty, and staff in 1995 and states the expectations for each LSU community member.

The Office of the Dean of Students transforms lives by facilitating opportunities and experiences to discover, engage and learn in a diverse, inclusive and just community while promoting social responsibility. Visit www.lsu.edu/tigertwelve for more information about the LSU Tiger Twelve.