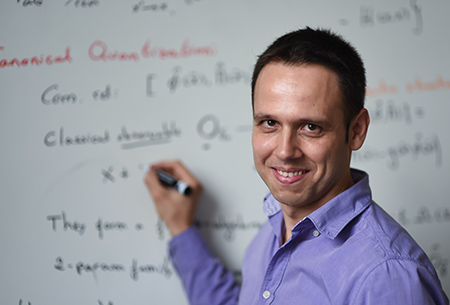 The NSF CAREER award is one of the foundation’s most prestigious grants awarded to promising junior faculty who effectively integrate research and education within the context of the mission of their organization. Agullo will receive $400,000 for investigating the most extreme epochs in the evolution of the universe and obtaining avenues to observationally test the new ideas.

“This is a truly fascinating time for cosmology,” Agullo said. “Recent observations have revealed remnants of physical processes that occurred a tiny fraction of a second after the so-called ‘Big Bang.’ However, the theoretical tools we currently have to interpret the data are far from complete. A key difficulty is how to make Einstein's theory of gravity consistent with quantum mechanics. The NSF CAREER Award will provide the support I need to focus my energy on understanding these fundamental questions, and to integrate my research and educational activities by involving students at LSU, and the general public in this fascinating field.”

About the NSF CAREER Award

The Faculty Early Career Development, or CAREER, Program is a foundation-wide activity that offers the National Science Foundation’s most prestigious awards in support of the early career development activities of those teacher-scholars who most effectively integrate research and education within the context of the mission of their organization.

Such activities should build a firm foundation for a lifetime of integrated contributions to research and education. NSF encourages submission of CAREER proposals from junior faculty members at all CAREER-eligible organizations and especially encourages women, members of underrepresented minority groups and persons with disabilities to apply.